We are Manufacturer, Supplier, Exporter of Solar Radiation Sensors and our set up is situated in Pune, Maharashtra, India. 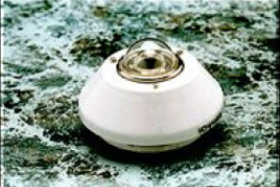 The pyranometer measures radiation received on a horizontal surface from both the sun and the sky. When exposed to radiation, the temperature of the blackened horizontal surface rises. Heat is lost from the blackened surface by conduction, convection and radiation. The equilibrium temperature reached is a measure of the radiation. This temperature is measured by a thermopile. SENSOR:
A thin metallic film blackened with a special paint ( which absorbs energy completely in the range of 0.3 to 3 pm ) is the sensor. A 72 element copper constantan thermopile is in thermal contact with this thin metal film. Alternate junctions of this thermopile are in thermal contact with the massive body of the instrument at ambient temperature which serves as the cold junction. This way a millivolt output proportional to the radiation received ( about 4 mV / kW / m2 ) develops across the thermopile. the instrument has a time constant less than 22 seconds.

SUNSUI Silicon Pyranometer model No. DLSR 8704 uses a Silicon Photovoltaic cell for measurement of incoming Solar Radiation on a flat surface. Since the response of this sensor is limited to a small wavelength band of approx 400 to 1000 Nanometers it cannot give an accurate reading of total Global Solar Radiation compared to black body type pyranometer. However when calibrated against Precision pyranometer this can give reasonably accurate values of incident Solar energy especially on clear days. For use in studies in Agricultural Meteorology and Solar energy conversion using photo voltaic devices this model is adequate. The sensor is mounted under a milky white diffuser.